Ioana lives together with her parents, three brothers and her grandmother in a house on a hill, in a village called Rachitele. Her parents do not have steady jobs, so they work on a daily basis in doing different chores for people in the village. In addition to this they also have a few animals around the house which provide them with the basic needs. Ioana's father has an alcohol problem and this is causing a lot of tension in the family.

Ioana is studying to become a manichiurist and a hairdresser. She has hopes and dreams of traveling the world, and wants to practice a sport and photography. Now she is living in Cluj, as a daily travel from Rachitele to Cluj is not possible. The yearly rent amount needed for her accommodation in Cluj has been paid by one of the sponsors.

We have met with Ioana during our visit in August 2017. We visited her at her home in Rachitele – quite difficult to reach, but otherwise a wonderful place in the middle of the nature. There we also met her mother, grandmother and three brothers. When we entered the house it was impossible not to notice the huge amount of prizes and medals everywhere. Ioana received some of them for endurance running and her older brother for ski font. We were amazed by the hospitality the family showed us – they greeted us with pine tree syrup and gave us cheese produced within their household. We are happy that we have met Ioana and that through FOR Children she is supported to finalize her studies. 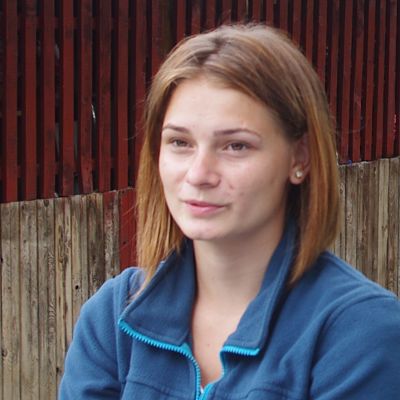