Kinga is 15 years old and lives in Baciu (a neighbourhood in the outskirts of Cluj-Napoca), together with her parents, one sister and one brother. They live in a two rooms house, one of the rooms including the kitchen. Their home is modest but tidy; the mother and two daughters are the ones taking care of the house. Kinga enjoys helping her mother with cooking, cleaning and taking care of her younger brother (after she finishes her homework).

Due to health problems in the family, the parents are experiencing difficulties in providing a proper financial support for the children: the father has heart problems and breathing problems, and Kinga’s brother has a mental disability. The mother has to spend a lot of time taking care of her son and husband; she doesn’t have time for a paid job.

Last September Kinga started going to high school. She had to make great efforts to get to school, but her determination was rewarded by being appointed the leader of the class (responsible with keeping discipline and order) by her teachers and colleagues. Kinga is grateful that she has the chance to learn to become a cook during the practical activities organized by the school. She says she is learning new and useful things from the restaurants where she is doing internships.

The only income of the family is the social allowance received for the children. Due to the fact that neither the mother nor the father has a job, they do not have health insurance. This means that they have to pay for each visit to the doctor. 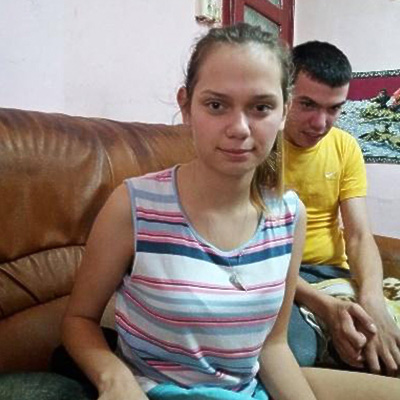